At the foundation of your Google Cloud Platform (GCP) organization is a relationship with your trusted identity provider. Commonly, this is a Gsuite domain or a Cloud Identity installation. It's the basis of trust for how users and groups are managed throughout the GCP environments. It's where you audit logins/logouts, enforce MFA and session duration, and more.

It's important to understand that in a GCP organization, where a user is granted permissions is just as important as what permissions are granted. For example, granting a user or service account a binding to an IAM role for Storage Admin at the project level allows that account to have all those permissions for all Google Cloud Storage (GCS) buckets in that project.

Consider a somewhat realistic scenario: That project has GCS buckets for storing audit logs, VPC flow logs, and firewall logs. The security team is given Storage Admin permissions to manage these. Also in that same project, a development team wants to store some data used by their application. They too, get assigned Storage Admin permissions to that project. There are a few problems:

Things get even more interesting when you consider a group of projects organized into a GCP Folder. Permissions granted to a Folder "trickle down" to the Folders and projects inside them. Because permissions are additive, a descendent project can't block or override those permissions. Therefore, careful consideration must be given to access granted at each level, and special attention is needed for IAM roles bound to users/groups/service accounts at the Folder or Organization levels. Some examples to consider:

The IAM page in the GCP Console tends to get "crowded" and harder to visually reason about when there are lots of individual bindings. Each IAM Role binding increases the cognitive load when reviewing permissions. Over time, this can get unwieldy and difficult to consolidate once systems and services are running in production.

Resource hierarchy decisions made early on in your GCP journey tend to have a "inertia". Meaning, once they are configured a certain way, they become entrenched and harder to change as time goes on. If configured well, they can reduce administrative and security toil in managing resources and access to those resources in a clean, manageable way. If configured sub-optimally, you might feel like making administrative changes is overly complex and burdensome. Often, these decisions are often made in haste during design and implementation efforts "just to get things working". It might seem that there is pressure to get things perfect from the outset, but there is some level of built-in flexibility that you can take advantage of -- provided certain steps are taken.

The two components of the GCP resource hierarchy that are trickiest to change are the organization and the non-empty project. The organization is the root of all resources, so it establishes the hierarchy. Projects cannot be renamed, and resources inside projects cannot be moved outside of projects. Folders can be made up to three levels deep, and projects can be moved around inside folders as needed.
What this means:

Consider the following diagram of a GCP Organization: 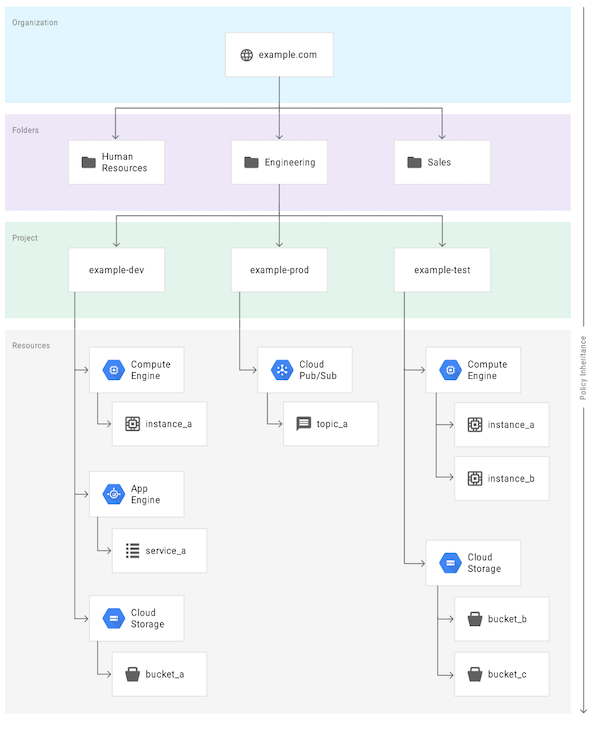 The organization is named example.com, and that is the root of the IAM hierarchy. Skipping over the folders tier for a second -- the projects are organized by operational environment which is very common and a best practice for keeping resources completely separated. Resources in the example-dev project have no access by default to example-test or example-prod. "Fantastic!" you might say, and copy this entire approach.

However, depending on your organization's needs, this hierarchy might not be ideal! Let's break down the potential issues with the folders and the resources inside each project:

VPC (shared vs peering based on administration model) Once the GCP organization, folder, and project structure is organized according to the desired hierarchy, the next step is to structure the networking and IP address management to support your use case.

As a small organization, it may make sense to have a single project with a single GKE cluster to start. Inside this project, a VPC network is created, a few subnets are declared, and a GKE cluster is deployed. If another cluster is needed for a completely separate purpose, another project can be created (with another VPC and set of subnets). If these clusters need to communicate privately and avoid egress network charges, a common choice is to use VPC peering which makes a two-way routing path between each VPC (A <-> B). When the third VPC/Cluster comes along, another VPC/Subnet/Cluster is needed. Now, to VPC peer all three VPCs, three total VPC peering connections are needed. A <-> B, B <-> C, and A <-> C. When the fourth cluster is desired, a total of six VPC peering configurations are needed. This becomes difficult to manage correctly and adds to ongoing maintenance costs for troubleshooting and configuration for each additional VPC.

The most common solution to centralizing the management and configuration of VPC networks across multiple projects is the Shared VPC model. One project is defined as the "host" project (where the VPC and Subnets are managed) and other projects are defined as "service" projects (where the services/apps/GKE clusters are deployed). The "service" projects no longer have VPCs and Subnets in them and instead are only allowed to "use" those VPCs/subnets defined in the "host" project. This has a few advantages for security-conscious organizations:

With the organization hierarchy set to have one project for each environment type to separate IAM permissions, a best practice GKE deployment has a GKE cluster for each environment type in its respective project. The natural tendency is to make a Shared VPC for a service offering (e.g. b2b-crm) and attach the three projects for b2b-crm-dev, b2b-crm-test, and b2b-crm-prod to it. From an operational perspective, this might facilitate simpler environment-to-environment communications to move data between clusters or share hybrid/VPN connectivity needs. However, from a security perspective, this is akin to running dev, test, and prod right next to each other on the same shared network. This can unintentionally increase the "blast radius" of an attack as a compromised test cluster would have more possible avenues to pivot and communicate directly with the prod cluster, for instance. While it's possible to do this with sufficient security controls in place, the chance for misconfiguration is much higher.

If the entire point of a Shared VPC is to reduce the number of VPCs to manage, how does that work when each environment and cluster shouldn't share a VPC? One method is to create a Shared VPC for related dev projects and clusters, one for test projects, and one for prod projects and clusters that need to communicate with each other. For instance, a project holding GCE instances sharing a VPC with a project running a GKE cluster as a part of the same total application "stack".

GKE is known for using a large amount of private RFC 1918 IP address space, and for proper operation of routing and interconnectivity features, CIDR ranges should not be reused or overlap.

If the prospect of assigning a /16 per cluster has the network team of a large organization nervous, consider using "Flexible Pod CIDR". In many situations, the resources needed by Pods and the size of the GKE Nodes makes the practical limit of pods per node far fewer than the max of 110. If the workloads for a cluster are such that no more than 50-60 pods will ever run on a node, the node will only use a max of half of the /24 CIDR assigned to it. The "wasted" 128 addresses per node can add up quickly. When creating a GKE Node Pool, specifying a MaxPodsPerNode of 64 or fewer will trigger GKE to assign a /25 from the secondary range instead of a /24. The reason for not going to a /26 is because of the natural lifecycle of a Pod IP assignment during a deployment is that greater than 64 IPs might be in use for short periods as some pods are starting while others are still terminating.